As a consumer living in America, I have always had a desire to have more. More friends, more clothes, more makeup, more technology, more things that indicated I was cool, essentially. Well there was a time in my life, not long ago in the slightest, that I decided to follow the “less is more” ideology in a dangerous way.

The following content may be triggering to some readers and it may be necessary for their well-being to stop reading at this point.

At the tender age of 14, I began to starve myself. See, I decided that if I ate less food and had less body fat, then I could be more attractive, more likable, and more of all the things I desired to be.

It began simply enough, with a strict limit on snacks and drinks. I could only allow myself one snack a day, preferably under 350 calories and could only drink ice water, with the exception of milk in my cereal. Sounds like a typical crash diet, which is still not that great but it was a lot better than what I was doing later on.

I began to become a little thinner visibly but it still was not enough for me. I thought a brilliant idea would be to also begin a fitness journey! This would normally be a great, healthy way to get in shape. Well, it isn’t so healthy when you are still following the previous diet restrictions while running 2.5 miles every morning and working out for 2.5 hours every night.

After a month and a half of this, I was loving how thin I was becoming, which was not even my thinnest point. I continued with this for probably another year or so, maintaining my thin yet toned physique.

Around the middle of my junior year of high school, my self-confidence hit a low. I was seldom satisfied with my body and was constantly comparing myself to other thin girls I saw in the halls. I decided that limiting snacks was not enough any more, I had to increase the amount of water I was drinking as well as primarily eat “healthy foods”. My new restrictions involved drinking 1-1.5 gallons of water a day and eating more vegetables and fruits while limiting carbs as much as possible, while still working out for 2 hours a day.

It was hard to hide my eating behaviors when I was home because I would be questioned about why I was eating less and whether or not I was trying to diet. I would casually lie saying, “Oh I had a big lunch today” or ” I had some snacks while I was at rehearsal, it ruined my appetite”. Whatever excuse I gave was bought and no further questions were asked.

My senior year of high school was when it hit the fan. By the fall I was easily drinking 2-2.5 gallons of water a day, I was obsessed with checking my stomach and how far it stuck out. What I would do in front of every semi-private mirror I came across, was either lift my shirt or pull it tightly around me and see how far my stomach stuck out. Then, I would suck it in as much as possible and say: “that’s what you should look like, try harder”.

I would also analyze my thigh gap. My goal was to constantly have a visible space between my thighs, even when walking. This is obviously unrealistic as some people have wider set hips, increasing the likelihood of having a thigh gap. But that didn’t matter to me, my sights were set on having one.

I also began weighing myself at least 3 times a day, I would find excuses to use the upstairs bathroom so that I could weigh myself. I would congratulate myself on any weight loss but was always sure to remind myself that I could still lose more.

My stomach and my thigh gap were what I would base what I was allowed to eat on. So if I had a “bad” day and my stomach was out more than I wanted or my thigh gap was smaller than I would like, then I would not only further limit dinner that night but set calorie restrictions for the next day.

I constantly had the notes and calculator apps on my phone open, that way I could keep track of how many calories and how much water I was consuming. The cut off was 1,500 for a day and if I had a bad day, the next day’s calorie allowance would be decreased to 1,200. I also learned that drinking so much water essentially canceled out what I ate so if I didn’t limit calories, I would drink 2 more bottles of water.

By the time spring rolled around, I could lose up to 10 lbs in less than a week. I would become angry with myself any time I snacked and was up to 4 gallons of water and at less than 1,200 calories a day. I prided myself in denying food and loved when people would comment on how thin I looked. My lunches consisted of Ziploc bags filled with nothing but celery and carrots. With how “successful” I was you’d think I was finally satisfied but I wasn’t.

I hated myself even more than before. I constantly felt nauseous and desperately wanted to vomit, so that I could lose more weight. I would sit in front of the toilet wanting to punch myself for not having the guts to make myself do it. If I “ate too much” that day then not only would I decrease food and increase water for the next day but I started using laxatives to force it quickly out.

I lost 10 lbs in the days before prom, in the hopes that I would feel more attractive when I was around all the people I envied. Hoping that in the pictures we took, I would be the thinnest one in the photo. You could easily wrap your hands around my side with one hand, encompassing the entirety of my stomach from my back to the front of my stomach. This may not sound super small but if you measure it, that’s about 4.5 inches. This was probably around the smallest I ever was.

Fast forward to me realizing that this isn’t healthy, this is not something I can keep up because it makes me hate myself, that thin isn’t the only thing I should aspire to be, etc. After some months of counseling, I was doing well compared to when I was in high school. I was still counting calories but I was allowing myself 2,000 a day. I was still watching water but cutting off at 1.75 gallons. I still watched my stomach and thigh gap but I was not as vigilant or strict as before. I also only weighed myself maybe once a month.

I was not happy with how I looked but I was getting there.

The next summer I struggled with a serious bout of depression. It was worse than any time before and I did not have the motivation or energy for anything. Including intensely watching my consumption habits. So I started snacking more and drinking things that weren’t water. I had definitely gained weight which concerned me and me dislike how I looked, yet I didn’t have the drive to do anything about it.

When school started again, I was worried about lapsing into my previous habits so I often found myself overdoing it when it came to eating. I just could not comprehend what normal portions were and that it is okay to not finish your food, it doesn’t mean it’s a  relapse.

I was still unsatisfied with my body but was scared to work out because I didn’t know how to exercise when it wasn’t at the intensity of what I was doing before. I just felt so lost and unsure of how to take care of myself.

I wish I could provide a happy ending where I am totally happy with how I look but that isn’t the case. I am still self-conscious and often find myself comparing myself to others. I still occasionally attempt to limit what I eat and increase my drinks. I hate weighing myself. I still analyze my stomach.

I do have good days. I have days where I look in the mirror and say, “Dang, you look good today”. I try to remind myself that people have different body types, so of course I’m not going to look like the petite girl in my sociology class. I try to listen to what my body wants when it comes to eating; I am still conscious of nutrition value of foods but more in the sense that I judge whether something has more grease than protein.

I am definitely not at 100% self confidence and probably won’t be for a while. But I can keep trying to be more:

-confident in myself as a person

-happy with how I think about myself

-appreciative of mine and other people’s unique bodies

-conscious of what my body needs

Your body is always changing and it is up to you to help nourish it. Take care of yourself because this is the only body you’ll get in this life. 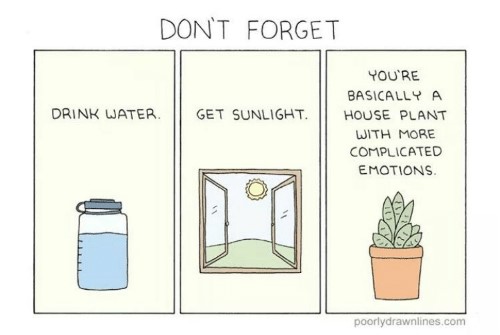 If you need help because you are struggling, I know it can be difficult but reach out to someone you can trust. You have people that love you and would be willing to support you in a time of need.

If you don’t have anyone you feel comfortable opening up to, you can always message me through my contact page. You are never alone.

I am a pansexual, first generation college graduate trying to improve my mental health and self image one step at a time. She/Them View all posts by Alyssa

One thought on “Starving For More”